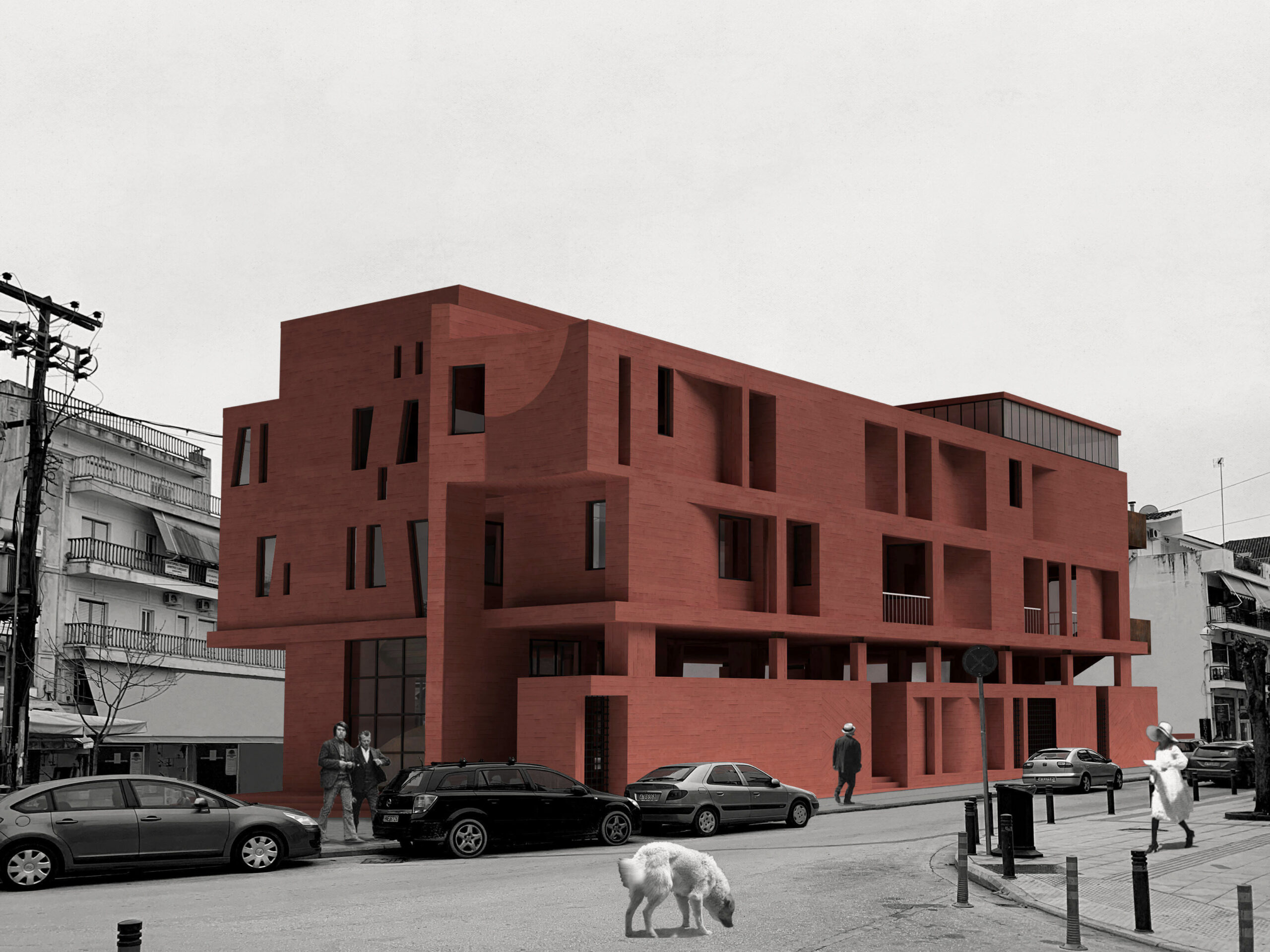 Sevdalinka: A center for the study of Balkan music & Marketplace

Inspired by Walter Benjamin’s text when he visited Naples, I began to approach the subject thinking about the porosity of the city. Buildings and parts of them are turned into a stage for the public. Balconies, stairs, courtyards and windows all become tents and seats.
The plot chosen for the design of the Balkan Music Study Center (K.M.V.M.) is that of the covered market of the city of Arta. The city is located in western Greece and has been built at the foot of the hill of Peranthi and on a bank of the river Arachthos.
The covered public market is located between two highways, a large municipal pedestrian street and a smaller alley. The plot is located very close to the city center and in the heart of the local market. So the market itself and the area around it are a meeting point for residents especially in the morning.
The existing construction of the market, although built in 2006, does not have all those features that will make it functional and viable in modern times. It is a simple iron construction with a serious lack of open and green spaces as it does not have a parking space.
There are residential buildings and shops around the study area. A short distance away is the Byzantine church of Ag. Βασιλείου. This temple with its ornate masonry of stone, brick and ceramic elements is a timeless landmark of the area. Thus, the initial goal was to develop a dialogue between K.M.V.M. and the monument respecting its history and past.
The second guiding principle was that of the study of the ruins of ancient Amvrakia that are found in various places in the city of Arta. The ground beneath the modern city is home to two other cultures and facets of the same city. That of archaic and Byzantine Arta, a kind of historical stratification.
The plot has a total area of 924.60 sq.m. while the proposed solution is to occupy 2008.22 sq.m. Initially the proposal is called to harmoniously combine two different building projects in a single construction. That of the new market and the K.M.V.M.
For the market the main design direction that was followed was that of its division into zones. The functions are classified according to their type but forming a large free space to connect them creating a free floor plan. The form of the portico as a characteristic place of commerce since antiquity, was chosen to house the fish market. Finally, the relationship between vacuum and full for the development of the rest of the building program was studied. A deep “ravine” runs through the building emphasizing this relationship. Symbolizing the diversity of the peoples of the Balkans with Western Europe but also the attraction of each other for a peaceful coexistence.
These two parallel walls, one vertical and the other at an incline of 3rd, help in the optimal air circulation and in combination with the through openings chosen, the building acquires a bioclimatic character and reduces to a minimum the mechanical support. Also the lighting with the shading is controlled thanks to the careful orientation of the openings and the “play” of the figures on the faces.
Sevdalinka is defined as a type of traditional music of Bosnia and Herzegovina that is also found in other parts of the former Yugoslavia. It is a combination of Slavic, Oriental and Sephardic musical elements while its name comes from the Turkish word “sevdas”, which means misery. As a result, these songs describe the anticipation and longing for the return of a lost person. So I wanted to convey this feeling from music to experiential art which is none other than architecture.